I first met Keira (originally called Shakira, by her rescuers, Sarah and Senora Maria) at Senora Maria’s house in Puerto Natales, Southern Chile, March 2016. I decided to change her name to Keira, as Shakira was a little long winded to pronounce, when calling her, plus Keira Knightley is a very good British actress, beautiful too, so quite a fitting name!

At that time Keira was recuperating after being hit by a truck, while living on the streets in Natales. Senora Maria and Sarah nursed her back to health. I was told that Keira didn’t walk for nearly a month. Thankfully she finally did and was enjoying a new life sleeping on Senora Maria’s couch and being fed regular meals. She got on well with all the other rescued cats and dogs in the house.

I should mention before I met Keira and my hope of adopting her, I thought it was only right and proper to check with my husband Mario, if he was actually okay adopting a second dog, as a few months before, we adopted Sasha, {I will write about Sasha separately} a beautiful Sarplaninac cross breed from Eastern Europe, through a wonderful London based charity called “Serbia’s Forgotten Paws” Transporting Sasha from Serbia to the Falklands was a long, complicated and expensive process, which as in the case of Keira, involved a stop over of six months quarantine time in the UK, due to strict animal import laws both in the UK and the Falklands. Maybe Mario wouldn’t be in favour of repeating the same process and expense for a second dog.

So I thought of a plan. I decided to share just a little information at a time regarding Keira. It might also help sharing the first piece of info over a Pisco Sour and a good piece of Magallanes steak at our favourite restaurant (Sotitos’s) in Punta Arenas.

So that is what I did. I explained to Mario that there was this lovely little dog in Punta Natales who looked like a female version of our beloved dog Bill, this was actually true. (Bill had sadly passed away the previous year of age related issues).  I told Mario, no commitment, just to see her, nothing more. Mario was already showing interest, I added, a drive to Puerto Natales would be rather nice, plus we could treat ourselves to a night in a nice hotel there.

My plan worked like a dream. The very next day we hired a vehicle and we were on our way to Puerto Natales!

Once we both met Keira, Mario and I fell instantly in love with this beautiful, gentle and shy little dog. She appeared nervous and at one point when Mario went to pat her, jumped up from the couch and retreated to a corner of Maria’s kitchen.

Thankfully Senora Maria and Sarah agreed we could adopt Kiera and we discussed how we could get her to the Falklands as soon as possible. Sarah very kindly offered to accompany Keira to the UK (Sarah originates from the UK) when she went on holiday later that year, and we would plan Keira’s onward journey from England to the Falklands.

That evening after we left Sra. Maria’s house, we checked into the Singular Patagonia in Puerto Bories which had been converted from an old meat processing factory to a five star hotel. There we celebrated the happy news in style. The Calafate Sours tasted extra delicious that night and so did the posh meal, pity, I could not actually recall what the meal  consisted of the next day!

Front view facing the shore from the Singular Patagonia. 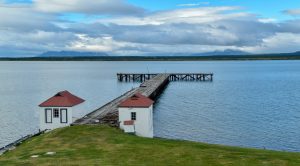 Quiet and peaceful, the view from our room at the Singular Patagonia.