In August 2018 I had a chance to drive a 2018 Nissan Rogue for three weeks. I have put a little over 4,000 miles on the car and had used it in a variety of conditions. Here are some brief observations.

What I personally prefer in a car is that I don’t notice anything, that everything is there when I need it and I don’t have to consciously focus on finding anything I need, or making it work. The cockpit should just disappear and let me focus on driving.

A steering wheel is a familiar element of most modern cars. What genius felt that they need to improve it by making its bottom section flat? Resting a hand at the 6 o’clock position on a long highway haul is uncomfortable, and letting the steering wheel free-spin coming out of a turn creates the feeling of a flat tire running on the road, with the flat portion slapping in and out of your hand.

The turn signal switch lever is just a little too short, and I have long fingers. It is also shaped like a half-eaten lollipop, so your finger just slides off its tip. A person with shorter fingers would have to re-position their hand on the steering wheel in order to activate the turn signal.

The radio, oh the radio! Why couldn’t I, the driver, remain in control of what you do?! I did connect my iPhone to it, and any time I would sit in the car and start it, it would turn On the stereo and start playing my playlist. It doesn’t matter if I turned it off last time. If I wanted to charge my phone and would plug it in, it would wait just long enough for me to relax, and then turn itself On, declare that it found an iPod and start playing! So I turn the audio Off. All right, I think I have won! Well, that is, until I try to use Google Maps, when there will now be no spoken directions, because the audio is Off. So you turn On the audio, fiddle with the system to hit the Pause button and stop the music, and then the spoken directions would work. In the end this system was similar to others with BT iPhone connection, but somehow more annoying and less intuitive than most.

The dashboard has the “race car” cylindrical decorative inserts around all the round dials. I am above average height, and the tubular bezels with bright chrome plating blocked the upper parts of all dials, so that I couldn’t see the tick marks, only the digits. The chrome plastic edges of the tubes are flat, so when the sun is just at the right angle behind you, you get very bright sun stars right in the middle of the instrument cluster. Yikes! More shiny flat surfaces are present in the middle part of the dash where the stereo is. That also causes sun glint in front of the driver when the sun is behind you. Bad design! After driving the Rogue I looked at my own Lexus RX300 that I never noticed this in, and sure enough – all the surfaces are slightly curved, reducing the sun spots to a single tiny bright dot on polished surfaces. Lexus got it right. 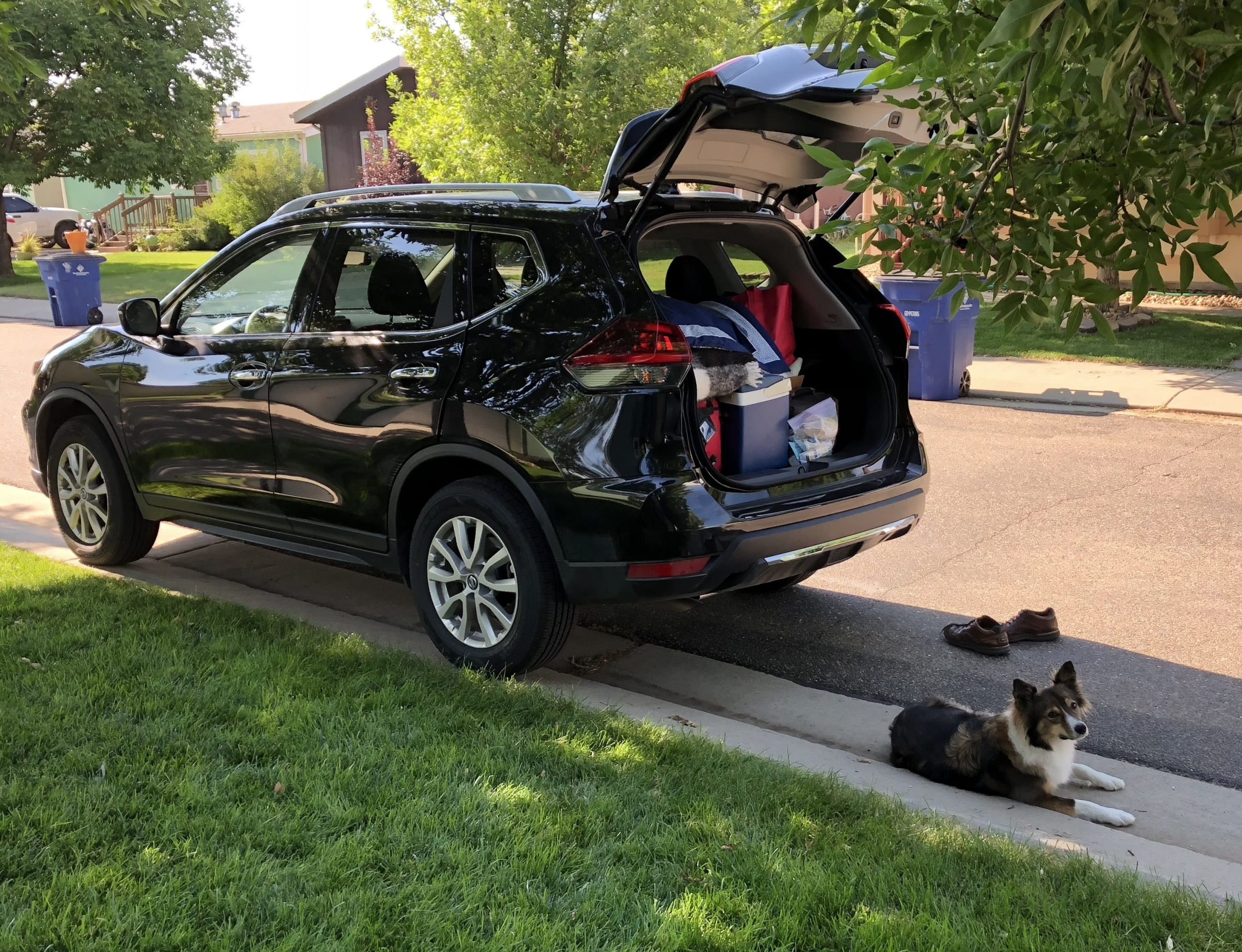 The baggage compartment has these two clever dividers that allow some six different configurations. I wanted the simplest, large volume single area. Well, the dividers then stow in the bottom of the compartment and take away two inches of depth, if not more. Clever as the design is, I can’t think of people changing those dividers daily into a variety of configurations, most of us simply put stuff in the trunk – and for these people, the trunk is so much smaller than it could have been, if the design was simpler.

The baggage compartment door is electric. It made me feel important when I pressed a button and it gently and slowly would start opening. It also made me feel like, oh come on, open already! I want to get to my stuff today! To close the door you have to use the power option too: just quickly pulling the door down is met with stiff resistance so no, you can’t just slam it shut and move on with your life. It will take its sweet time and close at the rate that it wants to close at. Gas tank door is also electric. You open it by pushing a button, and not just any push of the button will open the door. Some pushes, like those at the upper edge of the button would move the button, but would not open the door. So I learned that the best bet is to push it while carefully listening for the click of the door, if you don’t want to get out, walk around the car and find the tank door still closed. 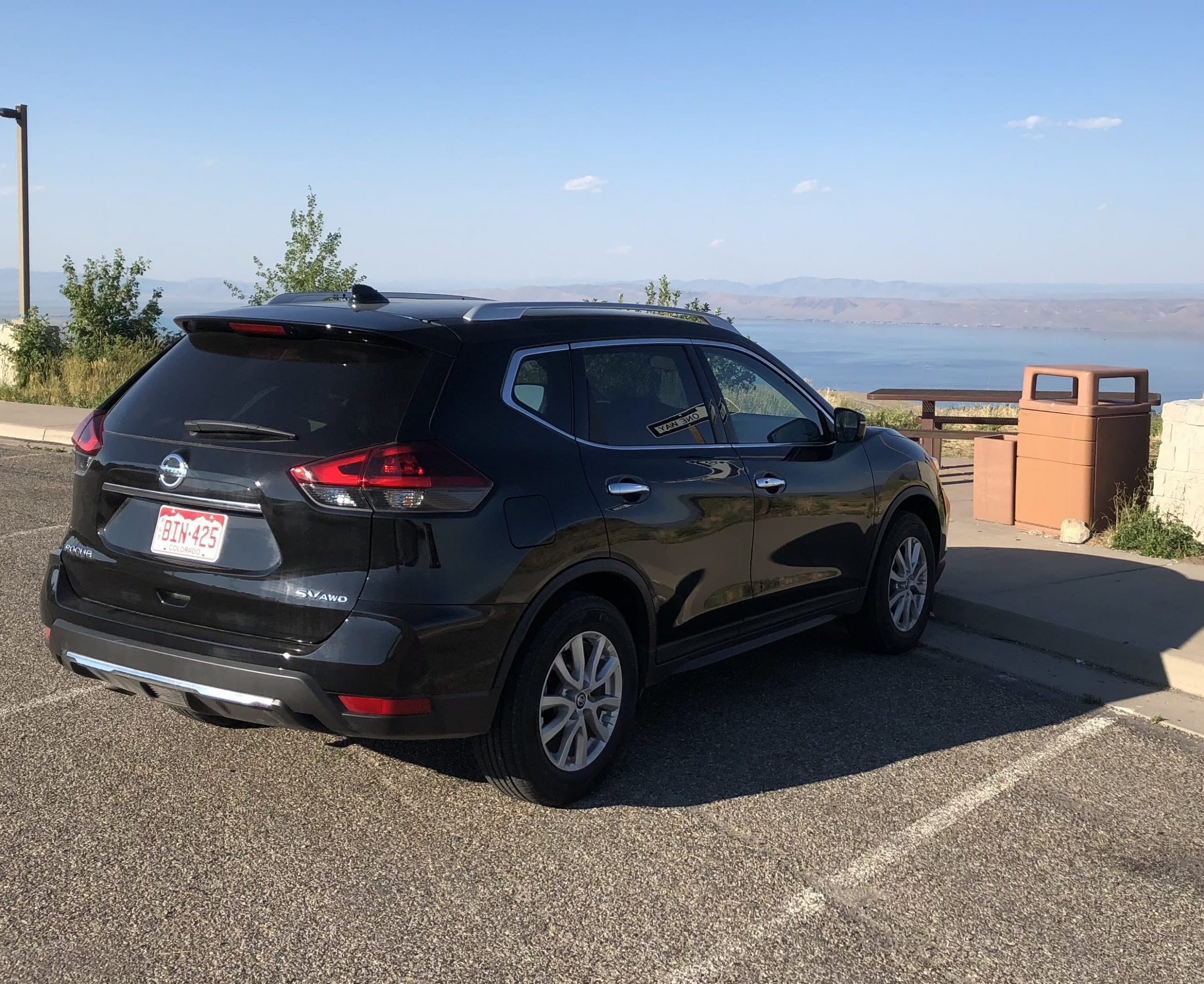 The car has a 4-cylinder engine that is adequate to move the vehicle but that’s about it. The relatively low power engine, combined with the continuously variable transmission, creates the feeling of sluggishness. Any attempt to accelerate, for passing for example, results in the engine revving up, RPM going to 4-5,000 and the car doing… little, if not nothing at all. Eventually it speeds up, but it will not aggressively press you into the back of the seat in the process. If this engine has any bottom end torque, you will never know it because it never operates in low RPM range and the CVT takes any character away from the engine.

As I mentioned, my own car is an old Lexus RX300, and driving the Rogue made me appreciate it all the more. The Rogue is more noisy, road noise being prevalent and the engine scream when passing other cars adding up to the impression. However, there have been no plasticky squeaks or creaks, which is nice.

On the highway, the Rogue’s steering was responsive and obedient. Passing requires planning, throttle response is mediocre. Road noise is substantial but better than older cars for sure. On gravel roads the Rogue was okay, but it floated on the washboard more than I would have liked. Its suspension is fairly soft but it didn’t bottom out when driven gently on moderately rocky roads of eastern Oregon.

Overall impression – the car is Ok if you like Nissan Rogues, or if this is the first car you ever drive. I would not buy one for myself. There are too many annoying design features that just don’t have to be there like that.