This is the story of Chiflada, one of the two dogs from Puerto Natales, Chile who we want to introduce here.

It was love at first sight. When I traveled to Chile this year for a field project, I met and fell for a street dog. I became so enamored with the stray pup that I decided to adopt her and bring her back to my home in Colorado.

I was in Punta Arenas, Chile, because we were flying the Global Travelers’ Gulfstream V over Antarctica to support NASA’s  Operation IceBridge  to monitor the Antarctic ice cover. There was a lot of work, but one day the weather over Antarctica was not good for research and we decided to drive over and explore Torres del Paine, Chile’s famous National Park.

My colleague Jhony and I had just spent a night in Puerto Natales on the way to Torres del Paine. We stopped on the shore to take some pictures of the beautiful waterfront, when this street dog walked past me, stopped, and looked up. I saw that she was very pretty and had smart eyes. I said to her, “You are a green-colored dog! Dogs aren’t supposed to be green. Why are you a green dog?” I said this because she has some fur that is black, other fur that is slightly brown, and other that is a little yellow, all mixed, and it made her back look a little greenish in the morning sun.

This is when the dog looked at me, wagged her tail, walked up to me, and sat next to me. I patted her on the head and she handed me her paw. She tried to lick me, stood up, and made footprints on the leg of my jeans. I let her go, then walked along the beach, taking more pictures. She walked with me and sat down next to me every time I would stop. She simply looked at me and looked around, without leaving my side.

And then she realized that I was walking toward the car. She stopped at the edge of the parking lot, looking right at me, and her tail fell down, and the ears fell down, too. She so obviously knew that I would get into this car, and disappear, and never come back. She looked like she instantly lost all hope. She probably saw so many other people do the same before. As we drove away, I saw her in the rearview mirror, looking at us leaving, and it broke my heart.

Even now that she is in my house, I see her in my mind standing there, abandoned, and it breaks my heart again.

We had a great visit in Torres del Paine, took a lot of great pictures, and saw the wonderful landscape of the mountains. The park is fantastic. Even though we are from Colorado and beautiful mountains are part of our daily life, Torres del Paine made a lasting impression. Call me crazy, but even throughout the day of wonderful scenery, I couldn’t stop recalling that small green dog on the shore of the fjord, looking at my car leaving, as I watched her footprint on my jeans gradually wearing off.

After the sightseeing we returned to Punta Arenas to prepare the Gulfstream V for its mission. I couldn’t stop thinking about the little green dog that watched me leave in the parking lot in Puerto Natales. I was restless, the thought of adopting the dog began entering my mind. Did I want to interject my way of life in the life of this free dog, that liked to run on the beach and chase birds, and had its own life? Did I want to change my own life – I fully realized that bringing a dog home would change the life in the house, for everyone.

In a couple of days I realized I can’t keep her out of my thoughts, and I had to try to adopt her. I contacted my friend Hernan in Punta Arenas, who reached out to animalistas in Puerto Natales. Then we wrapped up their work for the day, and Jhony and I returned to Puerto Natales to look for the dog that had stolen my heart. We searched in vain, and I was getting desperate. She was not on the shore, nor in the downtown plaza area. But Hernan’s emails and phone calls led us to Claudia, the woman who cared for and fed the little dog that she called Chiflada (“crazy, goofy, spoiled” in Spanish).

Claudia would not allow me to take the stray until I convinced her that I would take good care of the dog. This is when Claudia made a quiet whistle, and I thought, there is no way any dog would ever hear it! But 30 seconds later, the green dog of Puerto Natales herself came flying like a little furry rocket from behind a street corner, and ran directly to Claudia. She licked Claudia and jumped, and then she smelled me and jumped on me, and licked me too, tail spinning so hard that it looked like it may fly off!

I learned that Claudia called her “Chiflada” because she likes to run-run-run like crazy. I said that I will keep her Spanish name so that it reminds me of Puerto Natales, where she came from, and of her Chilean origin.

We discussed what needed to be done to make her able to go to the United States. Chiflada actually had been given her vaccinations and she was also sterilized thanks to the care and attention of Claudia and various volunteers who took care of the street dogs.

Now three of us in the car, we drove back to Punta Arenas with Chiflada, and I moved from my hotel, which didn’t allow dogs, to a hostel. Although the dog was larger than was usually allowed in the hostel, the owner took pity and permitted us two to stay because “we looked like we had nowhere else to go,” as the owner, Pauline, said later.

With huge help from Hernann and his friends we obtained the necessary paperwork and began preparations to return with Chiflada to the United States. A trip to the groomer resulted in Chiflada looking like a dog that a queen would not be ashamed to call her own. My wife told me from Colorado that if I had to delay my return to the United States to make sure I had all the documents for the dog, then I should do it without hesitation. Chiflada was worth it for her too even though she didn’t know her yet. She does now, and she would have said the same thing, only with even more conviction.

Then there were three international flights and many hours at airports where Chiflada was acting as if she really was born in a queen’s palace. She was quiet when needed, friendly all the time, and very peaceful. She made friends with children at the airports and licked hands of the airline desk staff, and the transportation safety officers were impressed with her friendliness. She made such good impressions on everyone that all people wanted to help, and we had no problems at all getting home. 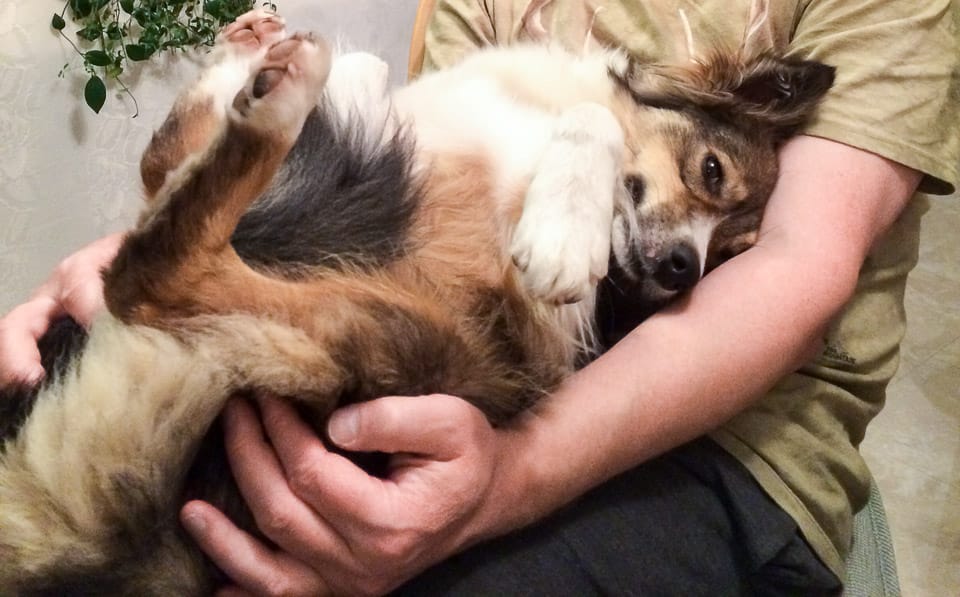 At home in Colorado, Chiflada gets me up and moving when I feel lazy; she is irresistibly happy and full of energy. There is a lot of open space for her to run and play, and she is learning all the new smells and having a great time. At home, she’s an excellent house dog who is popular with visitors. She meets and greets everyone who comes to visit, and is so smart and friendly that she instantly wins people’s hearts over. She loves to play and likes to fall at your feet, roll over and wiggle on her back, and try to grab your hand with her mouth, and push with her nose. She always sneezes when she is on her back, and it makes us laugh. She is a fantastic, super-smart dog, and I am so lucky that nobody recognized it before me, and that the green dog of Natales became my best friend.

The only thing more valuable than the little golden heart of Chiflada is the amazing people I met in Patagonia who helped me take her to her new home. I feel privileged to say that I now have good friends in Punta Arenas and in Puerto Natales.