As previously mentioned, animal importation laws into the UK are rather strict, even more so into the Falkland Islands, Sarah had a lot to do to prepare Keira for her long journey. There were many visits with K. to the vets for vaccinations, deworming etc., (the vets in Natales were excellent. So grateful to them), lots of documents to complete, emails to write, plus Sarah got K. familiar with going into the travel crate, walking on a lead, riding in a car etc. 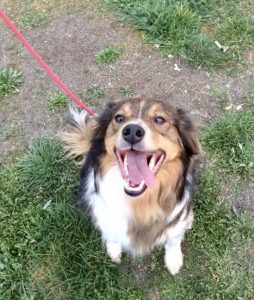 Leaving Natales and happy to begin her adventure!

Finally, seven months from the day we said goodbye to our sweet little K. that special time way back in March, at Senora Maria’s house, in Natales, things were moving!!

Kiera joining us in the Falklands was now becoming a reality!

03 October 2016, Sarah and K. early in the morning, left Puerto Natales for the three hour drive to Punta Arenas airport to catch the flight to Santiago.

As soon as Sarah and Keira’s flight arrived at Santiago, Sarah sent me a WhatsApp. She said all went well with the first leg. K. was taking to traveling like a pro and behaved so well and was very calm. 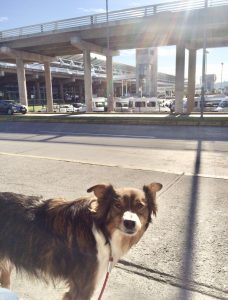 Unfortunately it was not possible for Keira and Sarah to travel together on the second leg of the flight from Santiago, Chile to London, so alternative arrangements were made for this part of the journey. Keira would travel with a different airline (United Airlines) in the cargo hold from Santiago via Houston, Texas and then on to Heathrow, London. For this leg we hired the services of a pet transportation company to make sure K. was properly taken care of, especially as from this point on, she would no longer be with Sarah.

While at Santiago airport waiting for her own departure, Sarah began getting everything ready for the next leg of Keira’s flight. K. was weighed, all her documents checked and then taken to an air conditioned room while she waited for her flight to Houston, scheduled to leave Santiago at 22.00 that evening. This is where Sarah and K. parted company. Sarah then left for her flight to London. Both flights were due to arrive at Heathrow about the same time the following day. 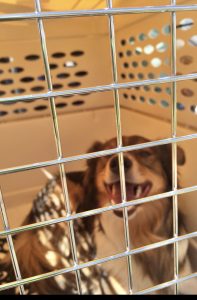 The next contact I received from Sarah was when Sarah arrived at Heathrow. She told me Keira had apparently arrived at Houston, all was well but there would be a delay with K’s arrival at London, as the flight from Houston was unfortunately cancelled due to a technical problem. (I later learnt this was actually due to Hurricane Nicole which impacted the flight route), Keira would therefore be on the next flight, scheduled to arrive at London the following day about noon GMT. Sarah added, that she herself had not long arrived at her mothers house in Portsmouth (just over an hours drive from London) and was enjoying a G&T. Very well deserved, I reckon so!! I really cannot describe how very grateful I am to Sarah for everything she did for Keira and us too.

The next day Sarah and her sister drove back to Heathrow to collect Keira.  How relieved and happy we all were that our sweet girl had arrived at her destination safe and well! I remember having a little celebration that evening with a glass of the best Chilean Merlot. Such wonderful news. One step closer to my dream of getting K. home to us! 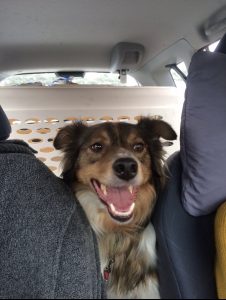 Yay!! Arrived in England. In the car, on the way with Sarah!

Keira stayed that weekend with Sarah at her mothers house in Portsmouth. I remember Sarah telling me, her mum was already becoming very fond of K. and wouldn’t mind keeping her there! I was not surprised to hear this statement. This little dog has that affect on everyone she comes into contact with! 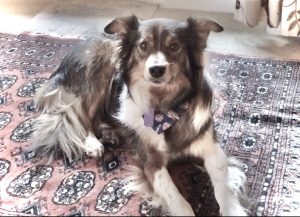