So there we have it, Keira was now in England and safety delivered to her temporary home by Sarah and ready to spend the next six months in quarantine, as per Falklands animal importation laws.

Quarantine, if you could call it that, was really not that bad!! When you think of animal quarantine, in this case a dog, the first thing that springs to mind is; confinement to a cage or to a certain space but this is not the case, they just have to be in the UK in order to monitor them in case any nasty diseases show up etc. Although at the time seemed a real pain, this is actually a sensible idea and there are other Islands who have similar, if not stricter animal importation rules, such as New Zealand. These measures are obviously working for the Falklands, as to date our Islands are disease free.

Through my sister-in-law Chantal, I found out about a wonderful lady called Sara, who fosters dogs. (Sara had looked after Sasha, from Serbia, for me for the six months prior to Sasha’s journey to the Falklands). Sara happened to live in the same village as my brother and sister-in-law. I had the pleasure of meeting Sara, her husband Tony and their son Oliver, while I was in England on holiday, June 2016. A great family who love and care about animals.

Keira’s temporary home, with Sara and family, would be in the beautiful English countryside in the quaint little village of Romsey, right on the edge of the New Forest. The New Forest is a national park covering the counties of Wiltshire, Dorset and Hampshire. It is particularly famous for ponies, deers, and other wildlife. This is where Keira had her daily walks. Lucky K.!

Besides owning several horses, Sara and her family also have two dogs of their own. Elsa, a beautiful Rhodesian Ridgeback and a cute little scruffy fellow called Charlie. Sara told me they found Charlie in a field close by and they believe he was abandoned by gypsies.

Charlie and Keira soon became good friends. Sara often sent me pictures of the two of them playing and cuddled up together. I have to admit being quite smitten myself with cheeky little Charlie, after meeting him! 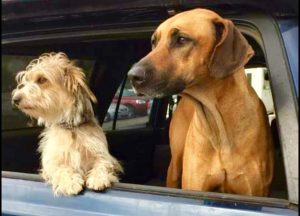 During her time in England, Keira needed more vaccinations, in addition to those she already had in Natales. Our poor little K. had more holes punched in her than a pin cushion! There were more documents to complete, more emails to write etc. A good friend of mine once joked that it might have been easier getting a nuclear warhead into the country! Luckily, as I was in the Falklands, I was able to do the majority of the applications online, although some of the paperwork had to be posted back to DEFRA in north of England by a particular date. Some of the vaccinations required for the Falklands needed booster jabs within a specific time frame. Dear Sara, has the patience of a saint, never once got cross with me, when I asked would she mind taking Keira to the vet for yet another jab, another health check etc. Forest Vets (Louise Melling) in Wiltshire as was the case with the vets (Carolina Ibarra) in Puerto Natales, both were absolutely marvellous. They really did go above and beyond what was expected of them. Isn’t it great when everyone is so cooperative and work together towards a common cause.

Thank you to Sarah, Sara and Chantal for all the pictures of Keira’s journey! 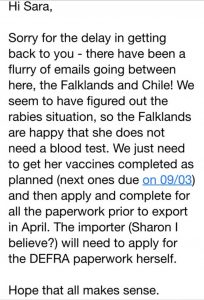 An example of everyone working together (from Louise, Forest Vets). 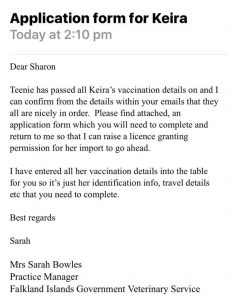