A month later, less a day, on the 11th May, 2017,  K. finally arrived in the Falklands!! Guess what next? You guessed right, another vet check! (this time it was carried out by Zoe, our local vet). Also more deworming pills administered, plus a jab into the fur in the back of K’s neck. This containing some sort of insect repellent. Because of the repellent, she was not allowed to be bathed for 48 hours, and goodness after sailing through the tropics and being on the ship all that time, she definitely needed a good bath!

I remember receiving a nice email from Zoe, saying Keira arrived in good shape and was indeed a lovely dog! 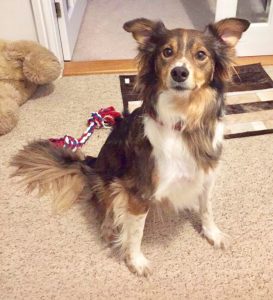 Finally arrived at the house!

From what I know, the crew on the ship take very good care of the animals. I remembered this from when our Sasha made the same journey the year before. The dogs are spoiled rotten by the crew who find them very good company during the long voyage South.

Lesley told me that when she went to meet Keira from the ship, the crew members who were assigned to look after the animals were rather reluctant to say goodbye to Keira and kept returning to Lesley’s vehicle to give K. as they said “just one last pat” Apparently they were visibly upset leaving K. Aww 🙁

A week after K’s arrival in the Falklands, Mario and I were reunited with her and that was the best feeling ever!! We were overjoyed!!

To all the wonderful people who helped make this possible, thank you from the bottom of our hearts. Truly speaking, every single person involved with K’s journey were all so kind and helpful, from start to finish.

Every year in December, what has now become a tradition, when visiting Punta Arenas, Mario and I drive to Puerto Natales and enjoy a little get together with Sras Maria, Sarah and Denise. We will always be grateful to them, after all, they gave us a wonderful gift, our amazing Keira!

And, as tradition dictates, we check into the Singular Patagonia and over a Calafate Sour, reminisce about times gone by and more to come. Happy times!!