Thankfully all went well, everything was in order. My sister-in-law Chantal delivered K. (as per instructions from Jeff), to the “Hartland Point” docked at Marchwood, Hampshire at noon on 12th April, 2017. Sara’s brother was getting married that day, so sadly she could not go. Probably best thing anyway, as apparently poor Sara was quite upset saying goodbye to K. Understandable, they were together for a long time. Charlie was probably going to miss his playmate as well! 🙁 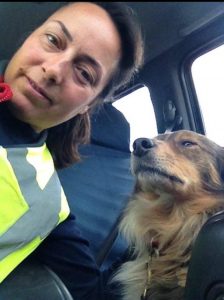 On the way to the dock with Chantal. 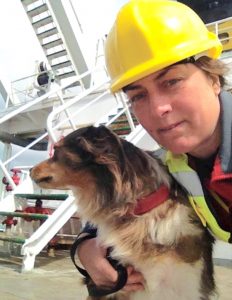 On board, K. very nervous, due to noise 🙁

In amongst the many containers. Still very nervous 🙁