Days turned into weeks and weeks turned into months. Finally it was time for Keira to bid farewell to England and to the foster family, who had taken such good care of her for many months. 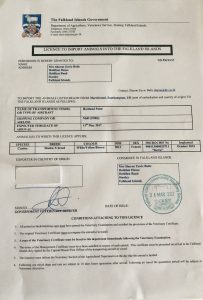 The final document. The best one! 🙂 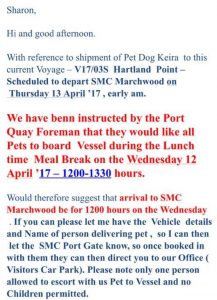 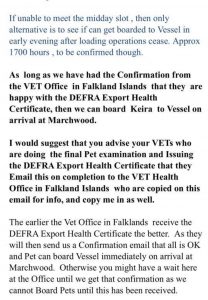 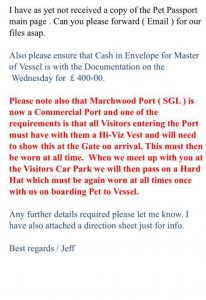 The information I was pleased to receive!

I received an email from Jeff, who was the ships logistics Manager. Jeff was always so helpful, a real pleasure to deal with. He informed me that the “Hartland Point” the name of the ship which K. would be sailing on, would now be leaving a week earlier than scheduled. Wow, great news, but this meant I would not be back home from visiting my son in Canada and be there to collect K. So disappointing, after all, I would miss this exciting event which I had waited so long for. Never mind, it wasn’t really the end of the world 🙁  I decided to ask my very good friend Lesley, who lived on a farm close to where the ship would dock (Mare Harbour, military port) to collect K and take her to Stanley (an hour’s drive) where she would be looked after very well at our house in Stanley with my oldest son and his wife, until I arrived home a week later. 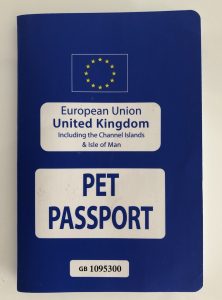 The thought of getting Keira onto the ship was the most anxious time for me as things could go horribly wrong. Keira had to have her final vet check twenty four hours before she boarded the ship. The vet would then check her over, hopefully all the boxes would be ticked, vet would then email the Entry Certificate to the Agricultural Department in the Falklands who would rubber stamp it and then email a copy to Jeff after which K. could finally board. Should there be any glitches, boarding would be denied. This would then mean a delay of a couple of months so all the paperwork would have to be done from afresh and many of her vaccinations would be by that time, out of date and therefore would need to be repeated. Needless to say, failure to board THIS ship was not an option!! The cargo ships chartered by the MOD that sail direct to the Falklands are not so regular, usually one every couple of months, as other times the ships call into Ascension Island and animals are not permitted to be carried on this route. There are only five kennel slots available for transporting dogs to the Islands by ship and these have to be booked many months in advance. You maybe wondering why I didn’t fly Keira from England. At this time it was not possible, due to the fact direct flights were chartered by the MOD and did not carry animals. 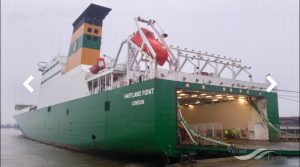 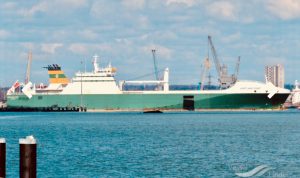